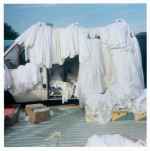 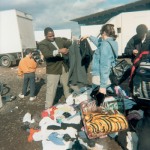 “In Hackney Wick, Stephen Gill tells several stories, the first one beginning
with a discovery. While taking photographs for the project A Book of Field
Studies, which was published in 2004, on a Sunday in January 2003, the Londoner
by choice ended up in this inhospitable place. To his surprise, Gill stumbled
upon an enormous marketplace where mountains of washing machines, video cassette
recorders, and refrigerators were being offered for sale. The desolate site made
no secret of the fact that the goods were stolen and that the immigrants and
asylum-seekers selling them were struggling to eke out a meager living. The
scene would have been an ideal stage for a critical social reportage. But Gill
observed the hustle and bustle more closely, and beyond the chaos and the noise
he noticed a fascinating spectrum of different lifestyles with a completely
separate set of laws. The Brit bought a plastic camera with a fixed lens for
fifty pence, which from that point onward he time and again aimed at the chaotic
trade center. ”